Support for Police in America: By The Numbers Support for Police in America: By The Numbers

There is a clear racial and partisan divide in opinions towards our nation’s police officers. No single group is anti-cop, but opinions differ in how police should engage with the communities they serve. A recent PEW research study provides some interesting insight on the situation and support for police in America.

Republicans (81%) are far more favorable toward the police than independents (59%) and Democrats (59%). Nevertheless, majorities of all three groups share a favorable view

Furthermore, it’s hard to argue that any group is “anti-cop” since no group wishes to cut the number of police officers in their communities and majorities are sympathetic toward the difficulty of police work. About 6 in 10 believe officers have “very dangerous” jobs. However, these groups diverge widely on whether Americans show enough respect for officers these days-64% of whites, 45% of Hispanics, and 34% of blacks say Americans don’t show enough.

Racial Impartiality: Black (31%) and Hispanic (42%) Americans are far less likely than white Americans (64%) to be highly confident their local police departments treat all racial groups equally. Democrats (40%) are about half as likely as Republicans (78%) to believe the police are impartial.

Competency: Four in 10 African Americans and 5 in 10 Hispanics give their local police high ratings for enforcing the law, protecting them from crime, and responding quickly to a call for help, compared to 6 in 10 white Americans. In a similar pattern, 5 in 10 independents and Democrats believe the police are highly competent, compared to about 7 in 10 Republicans. 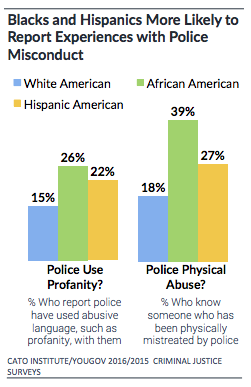 Americans do not believe the US justice system treats everyone equally

African Americans are five times as likely as Caucasians to personally expect worse treatment from police officers, but a majority still expect to receive equal treatment from law enforcement. A third of African Americans expect police officers to treat them worse than other people, compared to 6% of white and 13% of Hispanic Americans. Nevertheless, while many believe the system overall is not impartial, majorities of whites (77%), Hispanics (72%) and blacks (60%) expect to personally receive equal treatment from law enforcement.

Who Needs to Change: Citizens, Cops or Both?

The study examined public support for reforms police departments could implement in efforts to improve relations with their communities. However, some Americans believe that their fellow citizens, not the police, are primarily responsible for strained relations. They believe too few people show adequate respect for the law and the law’s enforcers and thus citizens should improve their behavior first. For instance, one online commenter wrote:

“I wonder how many deaths or injuries by law enforcement would have been prevented if the person would have shown respect to the officer, obeyed the directions and didn’t try to resist arrest or flee. We need to better support our officers and not try to defend the criminals who get by with all of the above.” 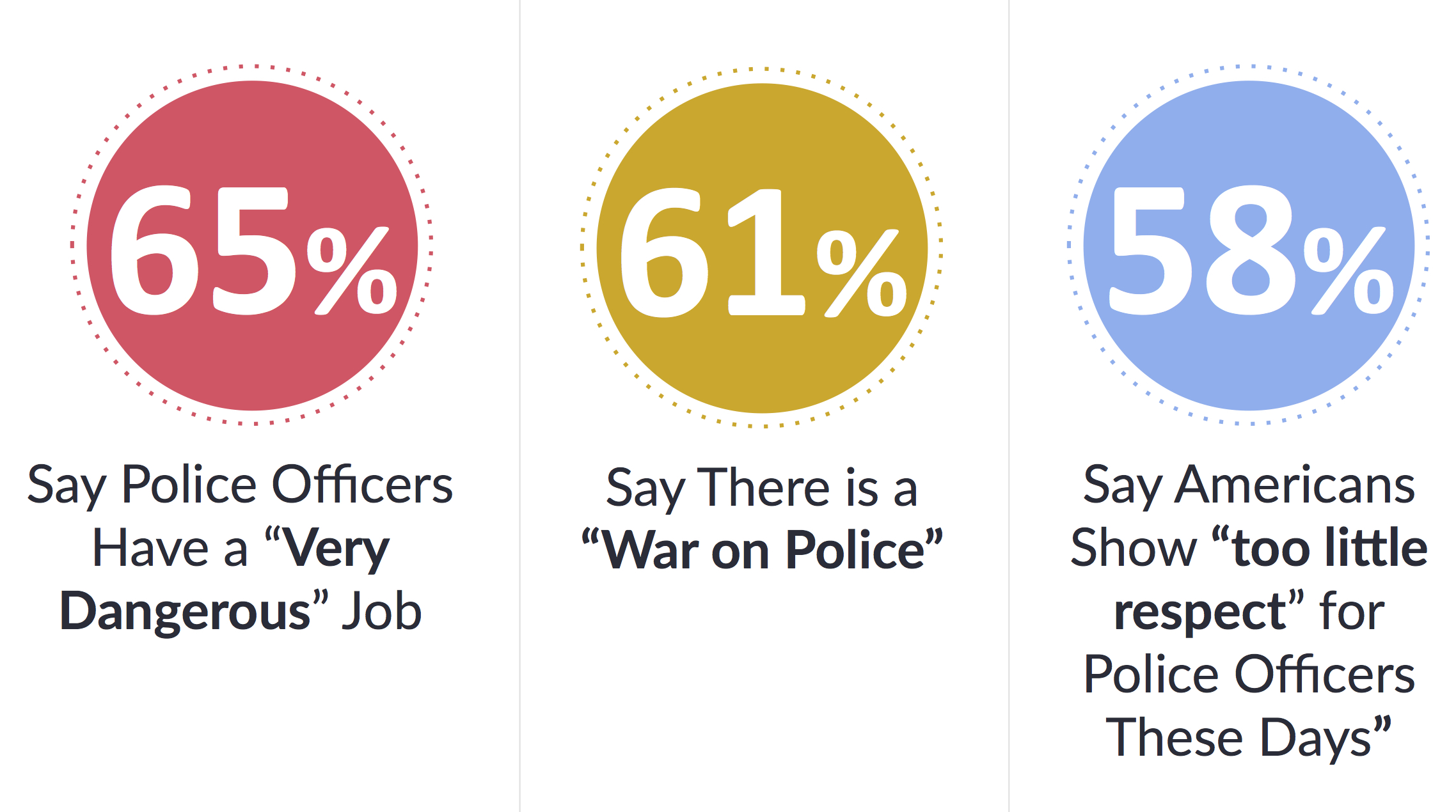 Two-thirds (65%) of respondents say police officers have “very dangerous” jobs, 30% say police jobs are “somewhat dangerous” and only 5% say their jobs are not very dangerous. In addition, most Americans (58%) believe their fellow citizens show “too little respect” for the police these days. Only a third think people show sufficient respect. Many Americans also don’t perceive systemic problems in policing. Americans give high marks to local law enforcement for enforcing the law (59%), using the appropriate amount of force (58%), being courteous (57%), being honest (57%), protecting people from violent crime (56%), treating all racial groups equally (56%), responding quickly to a call for help (56%), and caring about their community (55%). Furthermore, 54% believe officers are generally held accountable for misconduct when it occurs. (See Appendix B for a full breakdown.)

If people a) believe police are in a dangerous line of work, b) believe citizens disrespect the police, and c) do not perceive systemic problems in law enforcement-it becomes less surprising that 61% of Americans think there is a “war on police” today.

Our look at public opinion and the perceived “war on police” offers lessons to criminal justice reformers. Many people have had good experiences with the police and don’t perceive systemic problems in policing. Such people might assume that citizens instigate conflict with the police. Some people greatly trust authority figures like the police whom they see as the ultimate linchpin of societal order. People with such experience and views of authority may see intensifying criticism of the police and impassioned calls for reform as an attack on police legitimacy, and thereby, law and order.

As the APOA and our supporters seek to persuade fellow citizens, we should consider the implications of this analysis. Has our audience generally had positive or negative interactions with the police? Do they have a propensity to trust authority figures? If so, we should present evidence that speaks directly to these experiences and assumptions. Reformers might indicate their shared commitment to helping police to promote law and order. They can then explain how their reforms will accomplish these goals and improve police safety and police-community relations.